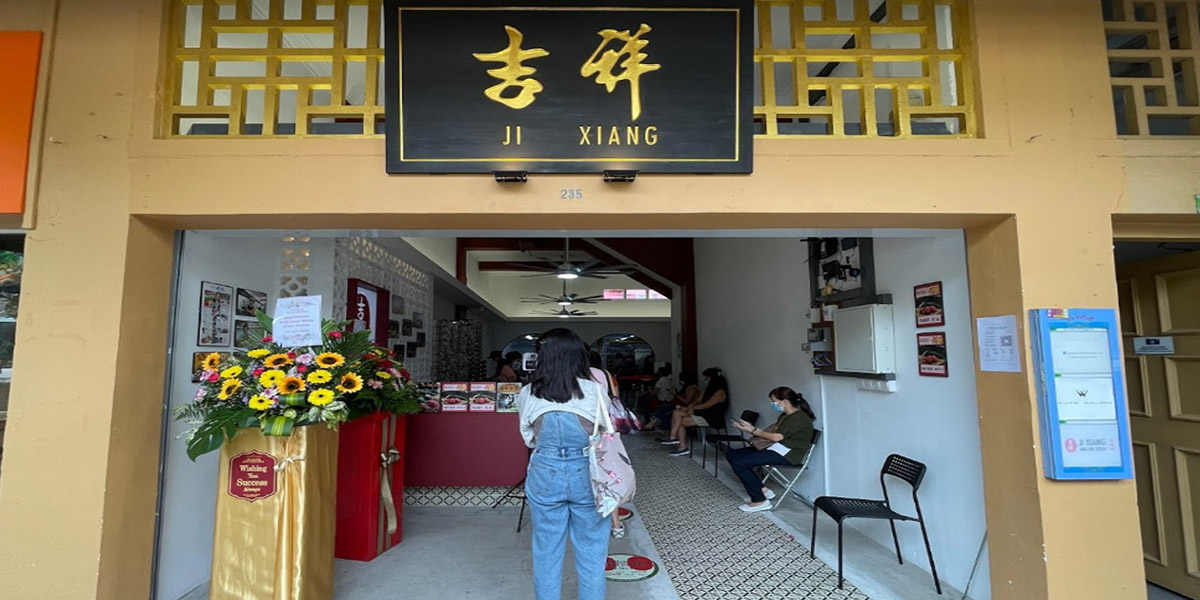 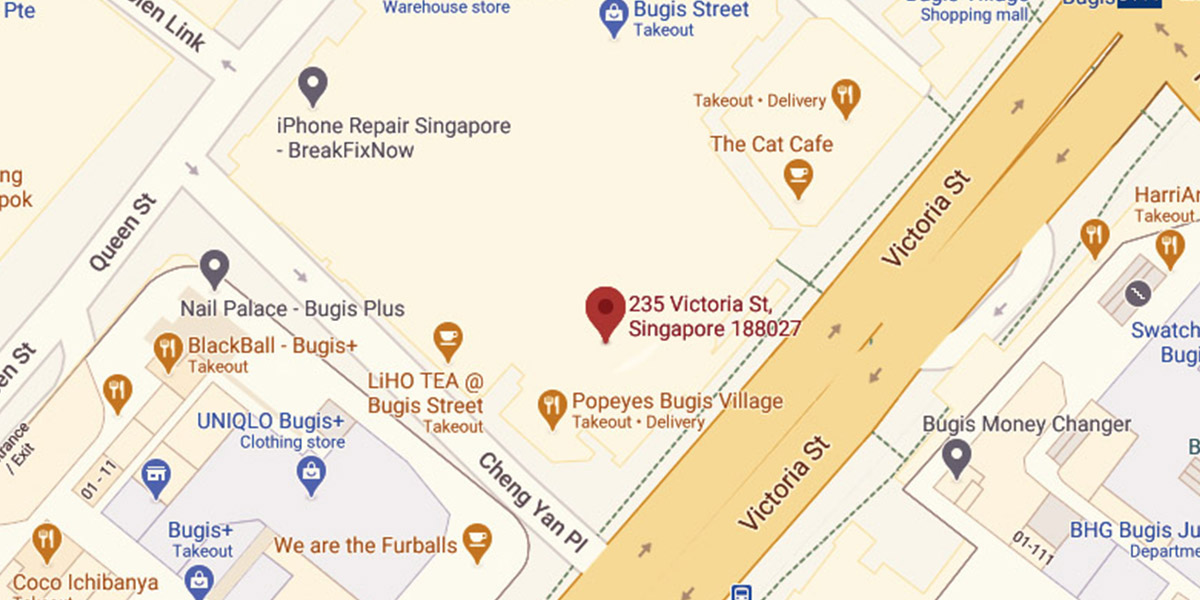 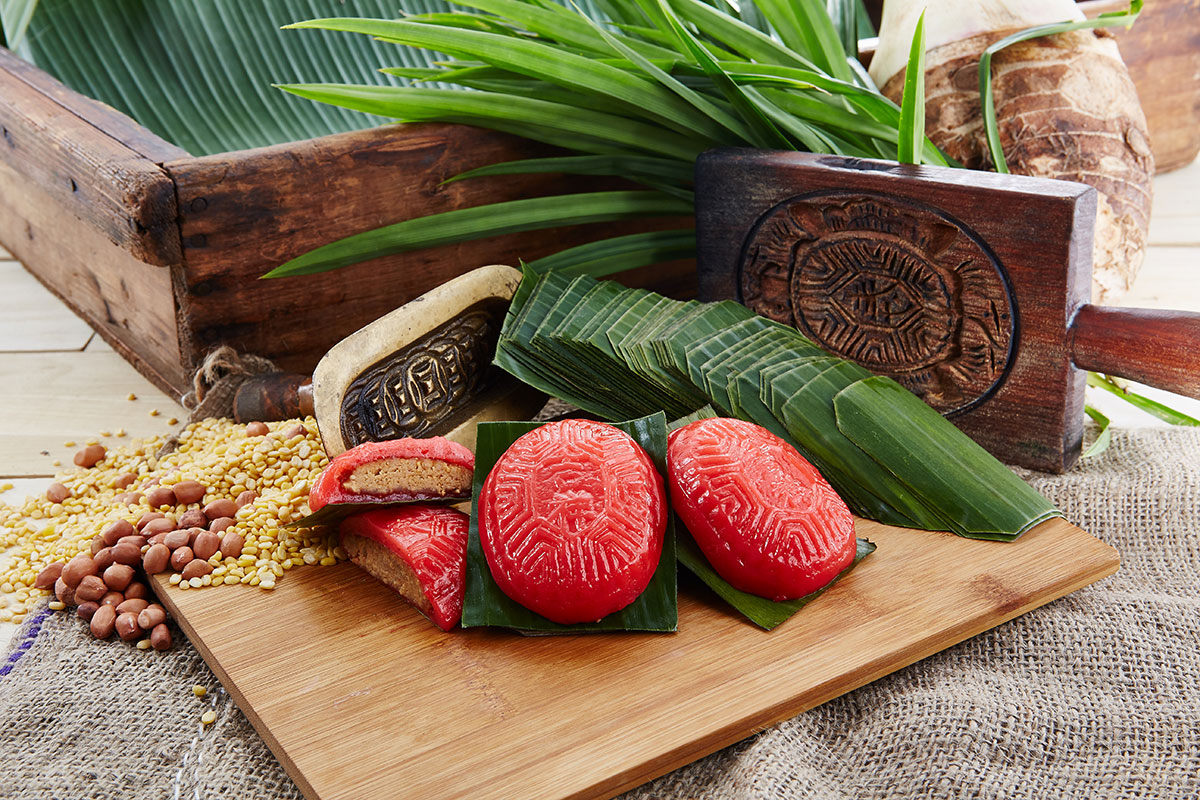 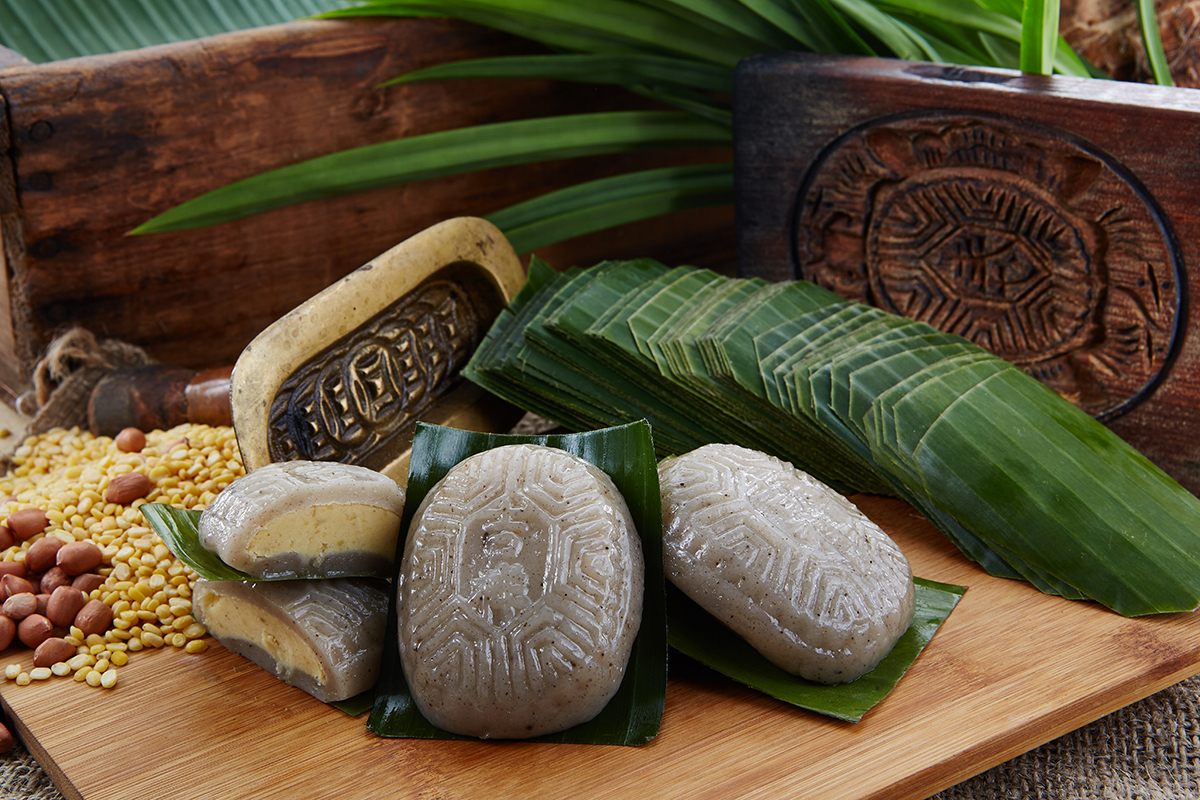 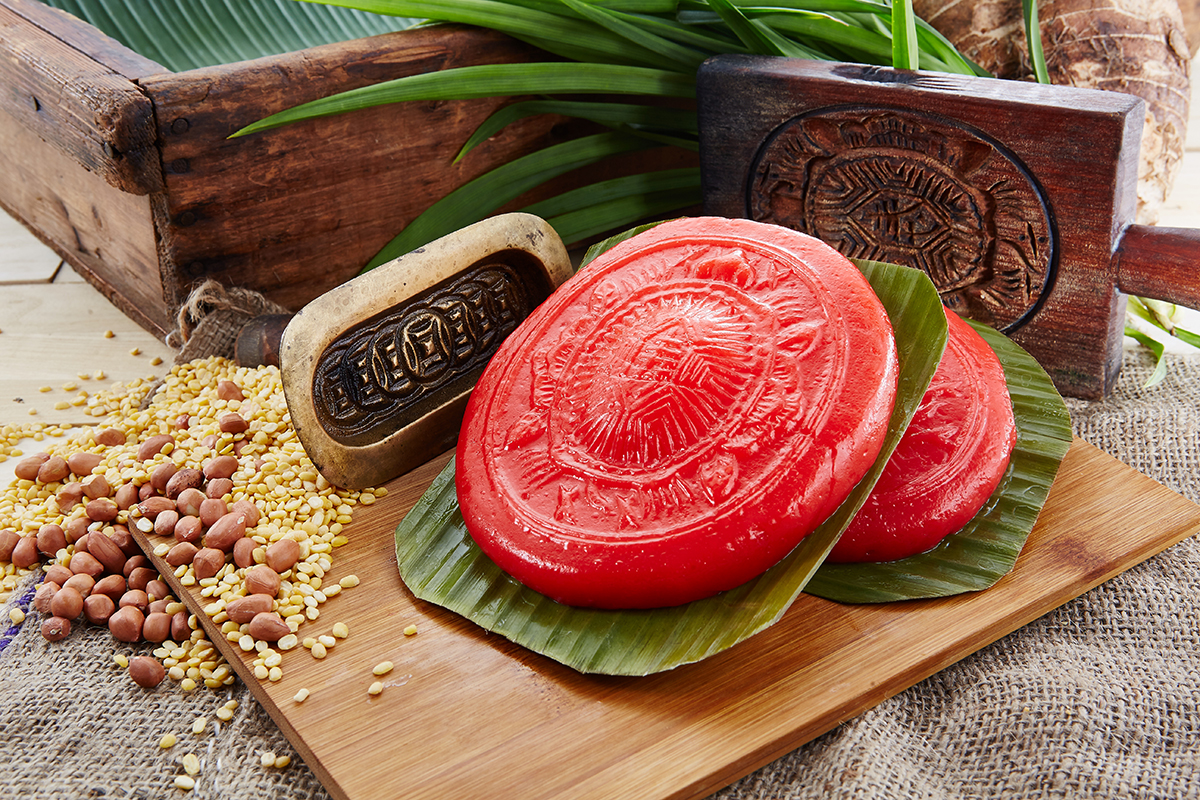 During the 4th month or mostly when a baby turns one years old, there is an old Chinese custom where the baby step on a pair of kueh.The kuehs are pray to the gods first and with a new pair of shoes to be worn later prepared by the side, the baby is helped to step on the kuehs.

jiao ta does mean “step on”, after all. Cai,or “long and wonderful”, also means “step” when written with another character. Stepping on the Ang Ku-Kueh to symbolise that everything would be 顺顺利利 as the baby grow up gradually. 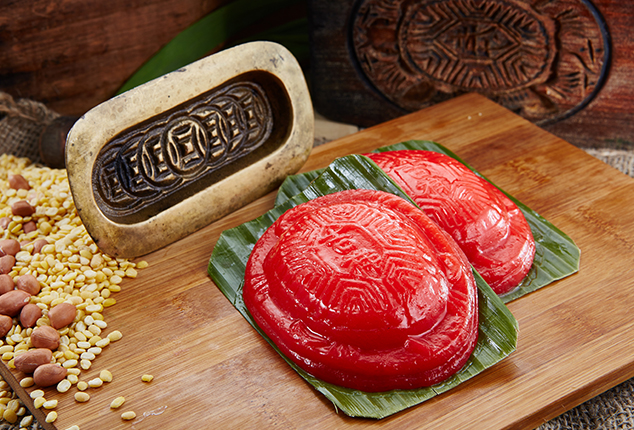 A bigger version of Ang Kueh Kueh, Tiong ku are used during Chinese festivals. When offering anything to the gods and deities, sizes matters in getting the attention of the gods you are praying to! 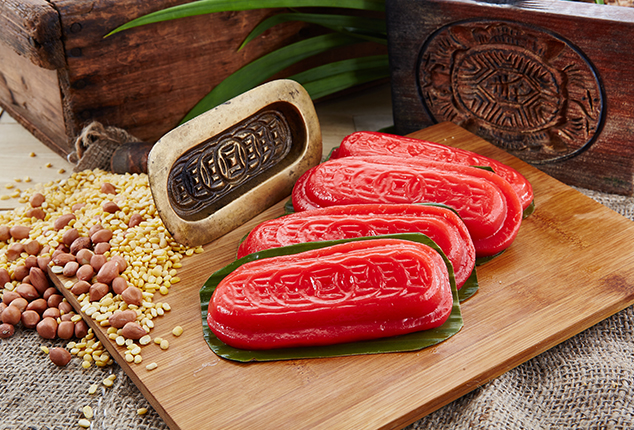 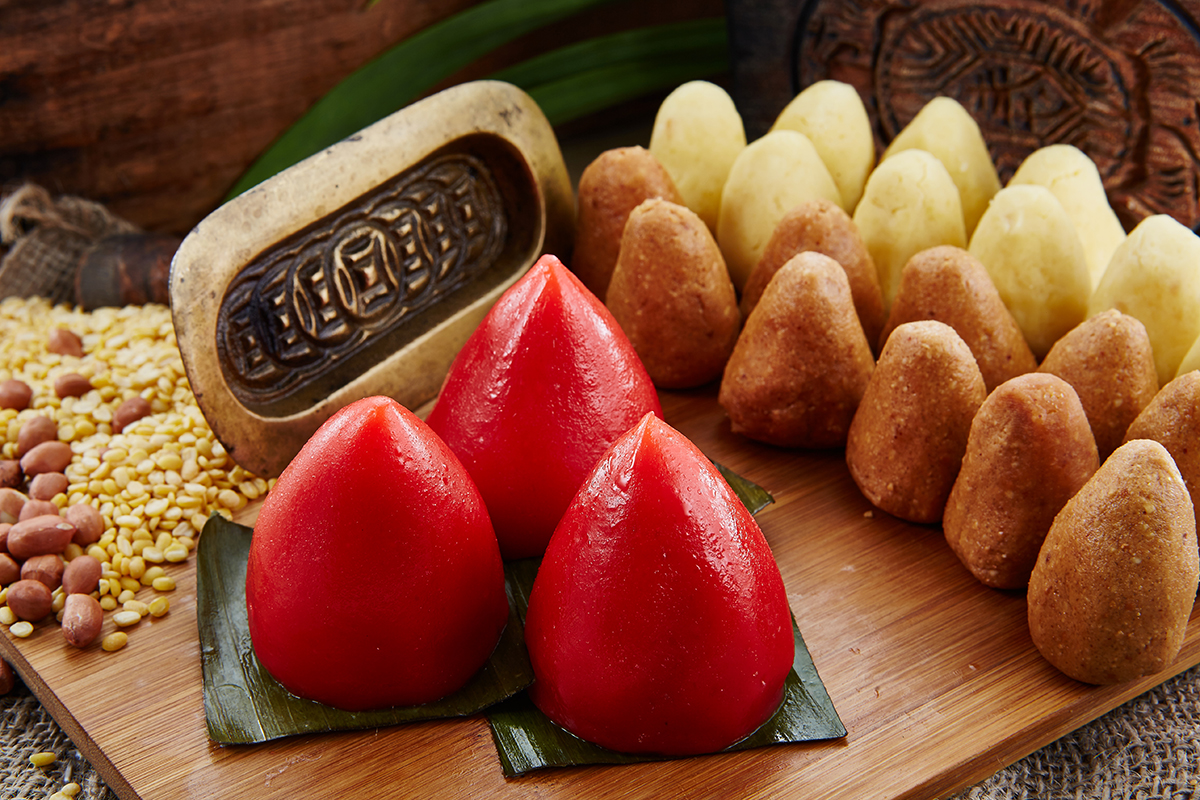 When a baby turns one month old, traditional treats such as ang ku kueh and red eggs are on the menu. These are given out to let relatives and friends know the birth and sex of your baby.Ang Ee are given out with the red eggs as gifts if the baby is a boy.

If the baby is a girl, Ang Ku Kueh with red eggs are given out as gifts.

At Ji Xiang, we pre-pack the goodies for you according if its a boy or girl, so all you need is to do is to give out the gifts. 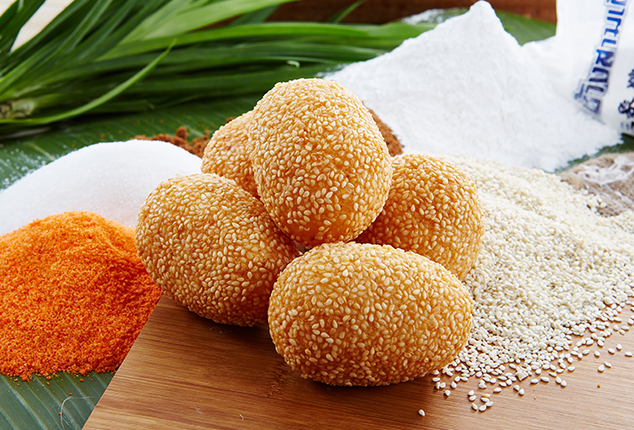 Jian dui is a type of fried Chinese pastry made from glutinous rice flour. The pastry is coated with sesame seeds on the outside and is crisp and chewy. Inside the pastry is a large hollow, caused by the expansion of the dough.The hollow of the pastry is filled with a filling usually consisting of lotus paste (蓮蓉), or alternatively sweet black bean paste (hei dousha, 黑豆沙), or less commonly red bean paste (hong dousha, 紅豆沙).Depending on the region and cultural area, jian dui are known as matuan (麻糰) in northern China, ma yuan (麻圆) in northeast China, and zhen dai (珍袋) in Hainan. In American Chinese restaurants and pastry shops, they are known as Sesame Seed Balls.[1] They are also sometimes referred to as zhimaqiu (芝麻球), which translates to sesame balls in English. 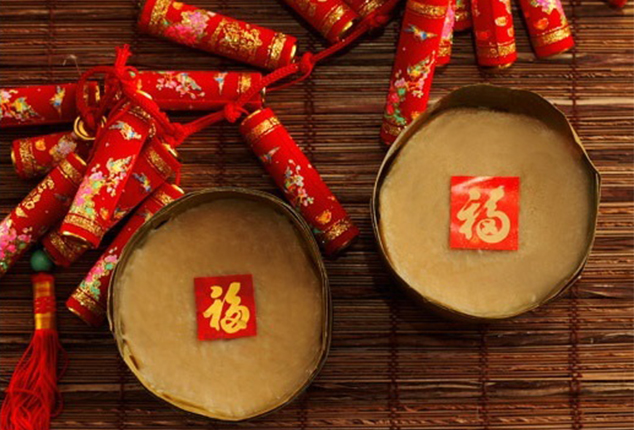 Niangao (nin gou in Cantonese), sometimes translated as year cake or Chinese New Year’s cake, is a food prepared from glutinous rice and consumed in Chinese cuisine. While it can be eaten all year round, traditionally it is most popular during Chinese New Year. It is also traditionally eaten during the Duanwu Festival. It is considered good luck to eat nian gao during this time, because “nian gao” is a homonym for “higher year.” The Chinese word 粘 (nián), meaning “sticky”, is identical in sound to 年, meaning “year”, and the word 糕 (gāo), meaning “cake” is identical in sound to 高, meaning “high or tall”. As such, eating nian gao has the symbolism of raising oneself taller in each coming year (年年高升 niánnián gāoshēng). It is also known as a rice cake. This sticky sweet snack was believed to be an offering to the Kitchen God, with the aim that his mouth will be stuck with the sticky cake, so that he can’t badmouth the human family in front of the Jade Emperor. Fa gao (simplified Chinese: 发糕; traditional Chinese: 發粿; Pe̍h-ōe-jī: huat-kué) is a Chinese cupcake-like pastry, most commonly consumed on the Chinese new year, that is made of flour (usually rice flour), leavening (traditionally yeast, but can be chemical leavening), sugar or another sweetener, steamed (instead of baked), until the top splits into a characteristic “split top” of four segments. The batter is typically left to rest for fermentation prior to being steam-cooked.The name of the cake is a pun, as “fa” means both “prosperity” and “raised (leavened)”, so “fa gao” means both “prosperity cake” and “raised (leavened) cake”. These cakes, when used to encourage prosperity in the new year, are often dyed bright colors.

WE ARE FEATURED ON TV!
CATCH US ON CHANNEL 8
THE SUCCESSOR 锁住味道 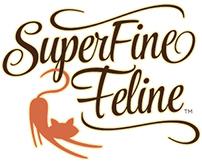 Ji Xiang Ang Ku Kueh was first opened in 1988 by husband and wife,
Mr. Toh Poh Seek and Mdm. Toh Bong Yeo at 1 Everton Park, dreaming of selling one million Ang Ku Kuehs.
Today, Mr. and Mrs Toh have long surpassed their dream and Everton Park now sees thousands of customers daily.
Despite the popularity, still insists that Ji Xiang Ang Ku Kueh still makes each and every one of our delicious Kuehs by hand, with lots of love, for you to enjoy.
In 2021, Ji Xiang Ang Ku Kueh launched a new flagship store at 235 Victoria Street, helmed personally by Mr Toh's younger son, Mr. Kelvin Toh.
Just like the thin skin of our Kuehs, we continue to humbly bring the same goodness with the biggest feelings for you in a brand new location.